Skip to content
Without any researches, Buying a new plot can be disappointed. Hence, there are various things that need to check before buying a plot whether you go for a Residential or commercial.

in this article, the following topic will cover for your reference:-

There are two types of plot shapes that are considered lucky but depending on their use: – 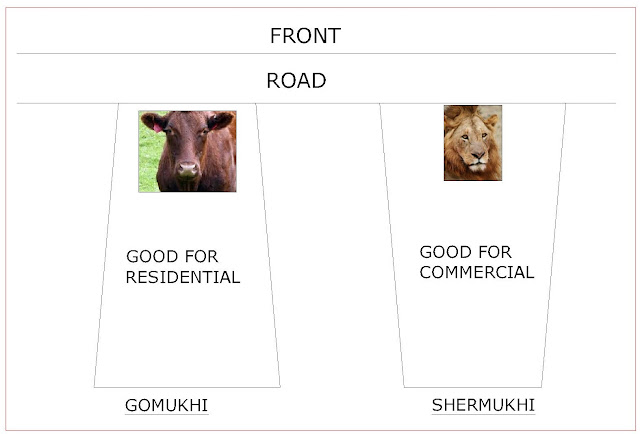 As you can see in the image Gomukhi plots shape is similar to Cow’s face. They are narrow from the front but broad from the rear. According to Vastu, the broad part should be laid in the North-East direction. Hence, avoid the narrow part of the plot should not lie in the Nort-East direction as it is believed inauspicious. Moreover, it is considered that Gomukhi plots are perfect for residential purposes. Because they are symbolizing the structure of a cow which holds spiritual importance according to Hindu scriptures.

Suggested Read:-Soil test and Water test of the plot for new Building construction

As you can see from the image Shermukhi’s plot shape is similar to Lion’s face. They are broad in the front and narrow at the rear. Hence, These plot shapes should be used only for commercial purposes. Because a lion an animal is considered as a source of power, control, and efficiency. Moreover, It brings huge profits to businesses.

#2. Things to check before buying a Plot

#3. Plots Shapes as per Vastu

According to Vastu Science,  It is believed that avoid plot sizes which are circular, triangular, oval, and other irregular shapes. Moreover, Do not buy any plots nearby Industries or factories which can be the reason for disturbance in your daily life.
In case if you live in irregular shape plots then the following Vastu effect may have been seen in life.
Sharing Is Caring:

3 thoughts on “Things to check before buying a plot”