You often have seen seven running horses pictures at residential and commercial premises. When you see it, I am sure the very first thing that comes to mind that of what purpose they have placed there. According to Vastu shastra, by keeping it you can boost up your work speed with the energy of this picture. Because Running horses depicts speed which indicates the symbol of success, progress, and strength. (7 running horses painting Vastu direction) 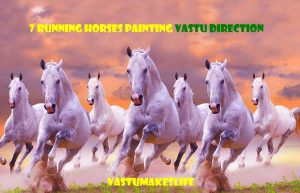 You may wonder why only seven number of horses picture is required? Because it has been said in the scriptures that seven numbers are natural and universal.

It is worth noting that the colors of the rainbow are seven, seven rishis, seven rounds in marriage, seven births, etc. Therefore, the number seven is considered to be natural and universal.

Where to hang the picture of seven horses in the office

In order to boost up your business, hang a seven running horses picture in your office cabin. While placing it, make sure it should be hung on the south wall. And the horses should be facing inside the office. As we said Running horses are symbols of progress, and the person who sees it frequently, directly affects the functioning of the person’s brain.

Therefore, these horses will prove to be helpful in getting success by providing speed in your work.

Suggested Read: Bedroom Vastu for couples and other tips

Where to hang the picture of seven horses in the house

According to Vastu Shastra, the importance of keeping the picture of running horses in the house accelerates your success. Especially seven numbers of horses are considered beneficial for progress, and the number seven is also considered auspicious. Although this type of picture can be placed anywhere in the house.

However, The east direction of the house gives more benefit. By Keeping this picture in the house promotion in the job and wealth benefits are also created. The picture of 7 horses running generates positive energy which brings you progress and success in every field.